Aamir to launch Vishwaroop 2, Amitabh to work with Sairat fame director, Madhuri gets emotional and other Bollywood Updates

MUMBAI: There is interesting line-up of movies and interesting things are happening in Bollywood. After another day’s time, a lot has happened in Bollywood. As the rains have started pouring heavily, so are the updates. Have your pakodas and get set for the Bollywood updates.

Bhushan Kumar will be producing Nagraj Manjule's Jhund which will soon take off. The producer has also roped in Amitabh Bachchan who will be playing the lead role. The actor will be seen essaying the role of a retired sports teacher who starts a slum soccer movement. According to director Nagraji, the film will also touch upon the issues of drug abuse and crime and will also showcase how sports can reform kids.

Bhushan Kumar, who will be working with Bib B for the second time, is looking forward to collaborating with the megastar once again.

Producer Savitaraj Hiremath says, "I was thinking of starting my next Bollywood venture and was looking for an emotional and relevant subject which would connect with the masses and channelize today’s youth into positive energy. Since last three years I have been looking for such subjects and one of them is a biopic of Vijay Barse who promoted Slum Soccer in India and showcased Indian talent to the world. Jhund is the slum soccer film which shows that there is a Hero in all of us…and it’s only a matter of opportunity life gives you." 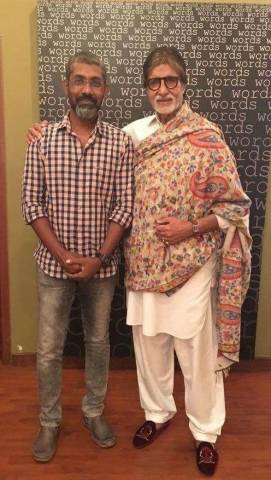 What do you think of Amitabh Bachchan?

On the day of his birthday (5 June) director, Milind Ukey surprised the Monsoon Football team by unveiling the name of the second cast of the movie by roping in Chitrashi Rawat from Chak De! India for the second lead along with Sagarika Ghatge. So it’ll be a reunion for the girls with Monsoon Football, the difference being that they were playing hockey then and now Football.

(Also Read: Chak De India has made me what I am today: Chitrashi Rawat)

The movie shall revolve around the middle-class housewives who're going through a monotonous schedule and dream to continue their passion even after marriage. The ambitious women shall be seen playing football and forming a team, with the attention score of them playing football in Saree and promoting Women Empowerment.

Chitrashi says, ‘Marathi cinema is known for its hard-hitting slice of life stories and I’ve been longing to do a Marathi film. I’m really happy that a film like Monsoon Football has come my way, which is a nice blend of sports and the stories of mundane housewives’ lives. Also, I’m really glad that our director Milind Ukey bringing me, Sagarika Ghatge and Seema Azmi to share the screen once again. It will be a lot of fun.”

''I was immensely impressed by Chitrashi Rawat in Chak De! India and I've always had the thought of having her on-board whenever I create a sport-centric movie. Monsoon Football is a project which is very close to me, for its concept and perspective that I am giving out to the audience and I want nothing but the best to justify the story. Chitrashi is a package of fun, seriousness, and talent altogether and it's a wise choice to have her on-board with Monsoon Football,'' says director Milind Ukey.

What do you think of Sagarika Ghatge?

I want to get directed by Gulzar: Divya Dutta

Actress Divya Dutta says that she wants to get directed by veteran filmmaker and writer Gulzar.

Divya was interacting with the media when she inaugurated ‘The Thailand Week 2018' on Thursday where she said, "There are many characters which I wish to play. I have seen all films directed by Gulzar saab and it is my wish that whenever he directs a film, I want to be part of that as I really like his way of filmmaking."

"I really like his Mausam (1975) and Aandhi (1975) so, I would love to do those films and apart from him, there are many directors with whom I haven't worked yet...half list of directors is still remaining," she added.

Talking about her upcoming projects, Divya said that her seven-eight films are lined up for release.

"There is Nadita Das's Manto and Fanney Khan with Anil Kapoor. I am also doing a romantic film called Music Teacher with Manav Kaul. There is a thriller with Arshad Warsi and Juhi Chawla as well. I am also doing Anubhav Sinha's Abhi To Party Shuru Hui Hai which is a comedy film and there is another film called Nastik with Arjun Rampal," she said.

What do you think of Divya Dutta?

Bollywood star Aamir Khan will digitally launch the trailer of the Hindi version of Kamal Haasan's bilingual Vishwaroop 2 on 11 June.

The Telugu version of the trailer will be launched by Jr NTR and the Tamil version by Shruti Haasan digitally.

Its Hindi version will be presented by Rohit Shetty and Reliance Entertainment.

Shetty said it was a matter of pride for him to work with a "legend" like Kamal.

The actor, who is riding high on the success of Raazi, took to Twitter to share an update about his next project.

The actor also shared an image of the film's clapboard in front of the Indian flag.

Vicky didn't share the location, but his co-star Yami Gautam had said that the first schedule will be shot in Serbia.

What do you think of Vicky Kaushal?

Pooja Chopra in Akash Goila's next

Aiyaary fame Pooja Chopra is all set for her next big project with Akash Goila, whose last directorial venture was a short film Dum Dum Dumroo starring Sanaya Irani.

The budding director has roped in Pooja for his next project which is going to be his first digital feature film.

"I have known Akash for long and when he discussed this project with me, I knew I had to be a part of it. This film is a rare gem and this kind of cinema comes far in-between so you can't let go of such an opportunity.”

"I'm very sure that this film will leave an impression like his last film Dum Dum Dumroo," Pooja said during a promotional interview.

Actress Alia Bhatt says she is having a great time working with megastar Amitabh Bachchan on Brahmastra.

"Working with AB has been supreme greatness! Today Amitabh Bachchan packed up an hour before the actual pack up but he stayed back on set just to give ques! I can't begin to explain the amount of things I am learning on set just by watching him," Alia tweeted late on Thursday.

The Raazi star also shared her excitement over getting back on set.

"Yes I call him AB because that is the term of endearment we have all agreed to. Thank you for being so wonderful sir! Can't wait to get back onto set with you, Ayan Mukerji and Ranbir Kapoor for some more Brahmastra madness," she added.

Humbled by the gesture the cine icon responded to Alia's post, and corrected her spelling mistake. 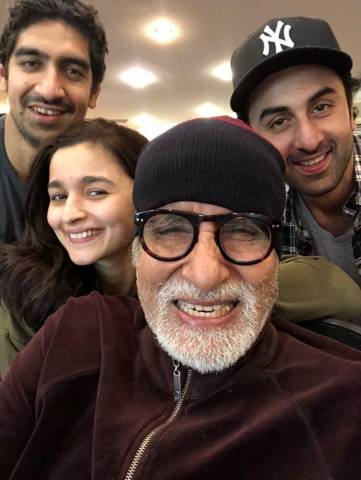 The upcoming fantasy adventure trilogy titled Brahmastra will be the first time that Amitabh, Ranbir and Alia will be joining hands for a project. The trilogy's first part will release on Independence Day, 2019.

What do you think of Alia Bhatt and Amitabh Bachchan?

Madhuri Dixit is an actor who is loved by people across all age groups! The timeless beauty who has floored everyone with her eternal smile still holds a special place in audiences’ hearts. The same was witnessed when the dancing queen made her Marathi debut with Bucket List.

Fans of Madhuri took 100 plus elderly people to the screening of her recently released film Bucket List. Her fans who were seen hooting and cheering her on, absolutely loved the film which goes onto prove that the dhak-dhak girl still rules the hearts of all. 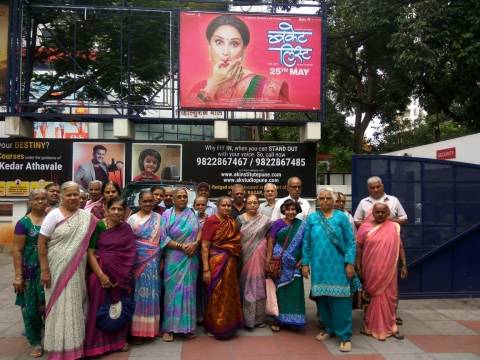 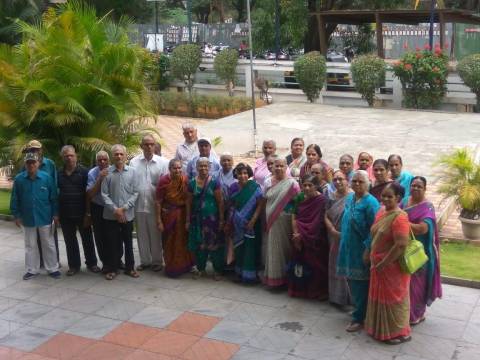 Talking about the same, Madhuri Dixit said, “I am very overwhelmed by this gesture. I can’t thank people enough for the love they have showered on me and for the film.”

The Dhak Dhak girl will continue to dance her way into our hearts forever!

What do you think of Madhuri Dixit?

Karan Oberoi confirms being in Inside Edge’s next season

Karan Oberoi, who has tasted success in the world of acting as well as music, says that with content becoming the hero of late, he will not let his passion for music restrict his ambition as an actor.

"Yes, now with the content taking centre stage across all eco-systems I am already exploring that side of me. I was a part of a web series called Inside Edge, which was big success on digital, and also a part of the second and third season which we are shooting sometime next month," Karan told.

Ali and Shraddha bond on the sets of Milan Talkies

Ali Fazal has been having a blast shooting for Tigmanshu Dhulia’s pet project, Milan Talkies, with debutante Shraddha Srinath.

The duo who will be playing college students in the film, set in the era of the 70mm theatres, have recently started shooting for the final leg of the schedule, after a tedious few months shooting nonstop in Lucknow and Mathura. The Fukrey actor has developed a great rapport with the Bollywood newbie who is a star in the south, and the two have been seen hanging out in between shots. 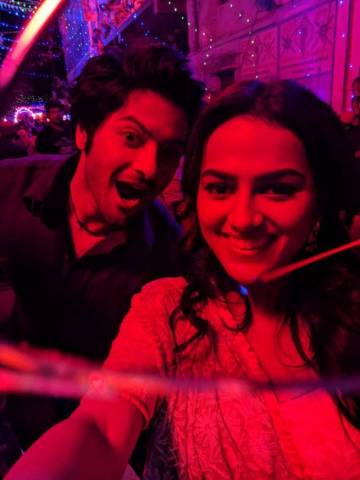 The pictures are proof that the two are slowly becoming good friends and we cannot see their bond translate onscreen.

What do you think of Ali Fazal?

Top Stories
APPLAUDING! Makers payback to Anupamaa fans with a special surprise
MUMBAI: Anupamaa is the most loved show on television right now, with TRPs of nothing less than 3.0 on a weekly basis....
Interesting! Alia Bhatt feels like a newcomer all over again as she sets off to shoot for her Hollywood debut
MUMBAI: After making her acting debut as a child in the 1999 thriller Sangharsh, Alia Bhatt played her first leading...
Imlie : Wow! This is how Imlie and Aryan looked post their muddy romance
MUMBAI: Imlie is one of the most successful shows on television and has done well on the TRP charts since it has hit...
Must read! Nawazuddin Siddiqui said he became so truthful after featuring in Manto that he ended up harming himself
MUMBAI: Nawazuddin Siddiqui has built a name for himself and has really lived the 'rags to riches' story. Nawazuddin,...
#AbhiRa Goals: Netizens go 'Koi Toh Rok Lo' for AbhiRa's fiery bedroom scene in Yeh Rishta Kya Kehlata Hai
MUMBAI: Yeh Rishta Kya Kehlata Hai has become the longest-running show on TV right now. Abhimanyu and Akshara are...
Exclusive! “I really wanted to work with Akshay Kumar but the story and the script didn't allowed” Anees Bazmee
MUMBAI: Anees Bazmee, the mind behind movies like Thank You, Welcome, Singh is King and others is now all set with his...
Recent Stories

Interesting! Alia Bhatt feels like a newcomer all over again as she sets off to shoot for her Hollywood debut
Latest Video