Oops! This is how Kamal R Khan takes a dig at Ranbir Kapoor’s Shamshera and Ranveer Singh’s nude photoshoot

MUMBAI: Both Ranveer Singh and Ranbir Kapoor have been making the headlines lately. While Ranbir is in the headlines for his movie Shamshera and also because he is expecting his first child with Alia Bhatt, Ranveer is in the limelight for his recent photoshoot, where he posed naked for the camera.

Recently KRK took to social media to slam both Ranbir Kapoor and Ranveer Singh for Shamshera and nude photoshoot respectively.

Kamaal R Khan took to his Twitter and claimed that Ranbir’s Shamshera shows are “cancelled today” as there are “no audience”. KRK claimed in a tweet that read, “Almost 40% morning shows of #Shamshera are cancelled today because of no audience. Rest 60% shows are running with very low occupancy. So, it’s clear now that film #Shamshera is much bigger Disaster than #ThugsOfHindostan! Hug congratulations to Adi Bhai.” 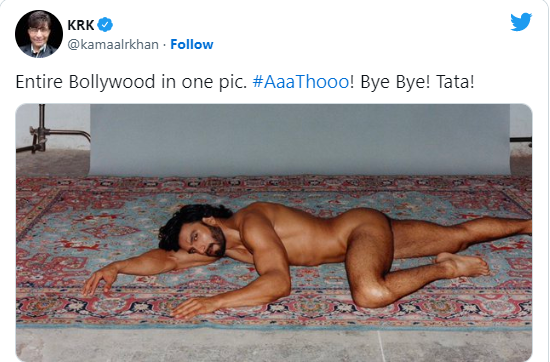 The self-acclaimed critic also has a suggestion for the King of Bollywood Shah Rukh Khan. KRK tweeted, “I suggested @iamsrk to not do films #HappyNewYear #Fan and #JHMS. But he did those films and all 3 films were disasters. Now I suggest to him one more time that he should not do #Pathaan because it will become a sure shot disaster.”