Rangoon is a tribute to INA and Netaji: Vishal Bhardwaj

He was present in Kolkata yesterday for the special screening of his film Rangoon. The family members of Netaji Subhas Chandra Bose graced the occasion. 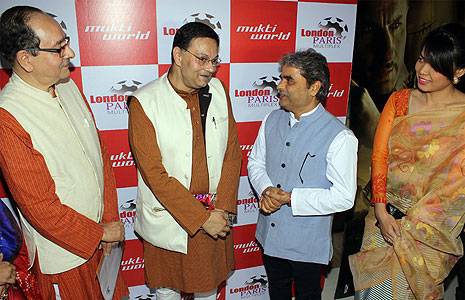 Addressing the media, he said, “The narrative in the film draws strong influence from INA (Indian National Army), which played a vital role in the freedom movement. That’s an important basis of this film. Hindi mainstream cinema has not talked much about the sacrifice of INA and Netaji. The young generation is not aware of the contribution of Netaji and INA. People have sacrificed their lives. INA hoisted the Tricolour for the first time on Indian soil in Moirang. That was a very proud moment but is an unknown part of our history. That’s also an important basis of this film.”

“It’s (the film) a humble tribute to them. It was very important to share with Netaji’s family. I am honored that Netaji’s family is here to watch the film,” he added.

He quipped, “Essentially, it’s a love story with the backdrop of war. And of course, in love and war deceit happens. So, deceit is common for all three (characters played by Saif Ali Khan, Shahid Kapoor and Kangana Ranaut). But the main catch of the film is patriotism.”

Kangana Ranaut’s character is said to be based on Fearless Nadia, an actress and stuntwoman. When quizzed, what made him zero in on real life characters like Fearless Nadia to stitch this fiction film, he answered, “There is no basis of Fearless Nadia in this film. It’s an original story and all the characters are original. All the three characters, the girl and the two boys, are original. But yes, you will get references of 1940s like the backdrop of INA and British Raj. I have not played with the facts but have mixed them with fiction.”

At the screening of the film in Kolkata, actress Lin Laishram, who played a small role in Rangoon, was also present along with Vishal Bhardwaj.

Introducing Lin to the media, he said, “Lin has played a small part but it’s a very beautiful role. We do not use North Eastern actors in our film much. Lin is a very good actress and she has done a fantastic job in the film.”

“Rony (Rajatava Dutta) is also my favourite. He has worked with me in Kaminey and Ek Thi Daayan,” he signed off.

Rangoon is currently running in theatres.

Top Stories
Spoiler Alert! Rabb Se Hai Dua: Raahat in a major dilemma
MUMBAI :Rab Se Hai Dua by Zee Tv, produced by Prateek Sharma is about a Haider and Dua, who play husband and wife. But...
Spoiler Alert! Katha Ankahee: Aarav gifts Katha an expensive dress, Viaan mesmerized by Katha
MUMBAI :Sony TV’s new show ‘Katha Ankahee’ produced by Sphere Origin, is a remake of the Turkish serial “1001 Nights”....
Can two pieces of paper rip apart the Wagle family? Find out more this week on Sony SAB’s Wagle Ki Duniya
MUMBAI :Sony SAB’s Wagle Ki Duniya – Nayi Peedhi Naye Kissey is a slice of life family drama that delves into the lives...
Imlie: Exclusive! Imlie finds out about Cheeni’s plans to ruin the wedding!
MUMBAI :Star Plus’s show Imlie is one of the most popular daily soaps on TV right now. The second season brought in a...
Spoiler Alert! Teri Meri Doriyaann: Furious Manbeer calls off Angad and Seerat’s wedding
MUMBAI :Star Plus’ newly launched show ‘Teri Meri Doriyaann’ by Cockrow and Shaika Films, has started on a very...
Everyone Deserves a Best-Friend like Pandya Store’s Rishita aka Simran Budharup; here’s why we say so
MUMBAI :Pandya Store has managed to create a place in the hearts of the audience with its relatable plot and honest to...
Recent Stories

Audience Perspective! Is Kangana Ranaut’s story about being spied on a real one or fictitious?

Kriti Sanon: I want to shift gears constantly & not stay in a particular zone

Kiara-Sid to reach Jaisalmer on Feb 5, families to arrive on Saturday

Sidharth Malhotra-Kiara Advani wedding: Did you know Karan Johar, Gauri Khan, and other celebs have already been to Suryagarh for a lavish party?