Sanju's sequel on cards? Katrina's ZNMD reunion, Saif- Sara in a movie and other Bollywood Updates

MUMBAI: Here we bring yet another platter of hot and spicy gossips from the world of Bollywood. Take a look at the latest happenings of the tinsel town.

Here we bring yet another hot and spicy gossips from the world of Bollywood.  Have a look at the hot happenings in B -town

Filmmaker Anand L. Rai says he does not know whether it is the "fantastic person" or the "magical actor" in superstar Shah Rukh Khan that brings a smile to his face.

Rai on Wednesday night took to Twitter, where he shared a caricature of Shah Rukh's character from his upcoming film Zero.

"I really don't know whether it is this fantastic person or the magical actor in him who brings a smile to my face and happiness on the sets. Love you Khan Saab Shah Rukh Khan. Have enjoyed every moment of filming Zero!" he captioned the caricature.

Zero is a story that celebrates life. Its first look featured Shah Rukh Khan as a vertically challenged man.

It also stars actresses Katrina Kaif and Anushka Sharma, who have previously featured with the Dilwale star in Jab Tak Hai Jaan in 2012.

The movie is slated to release on 21 December.

'Hichki' to be screened at IFFM

Actress Rani Mukerji starrer Hichki will be screened at the Indian Film Festival of Melbourne (IFFM) to propagate theme of inclusion.

Indian cinema will be celebrated under the theme of inclusion, with an array of films set to be screened from 10-22 August. Hichki will be screened on 11 August.

Directed by Siddharth Malhotra, the film tells the story of a woman who deals with Tourette syndrome but goes on to become a teacher.

"Hichki comes at a time when we really need an uplifting story, which makes us believe that nothing is impossible and everything is achievable if we believe in ourselves and our goals. This year the festival is celebrating the core of the theme of inclusion and it’s great to know that our film will be screened in liaison with this thought," Malhotra said in a statement.

He says that "it is not only about inclusion, in so many ways that it naturally is due to Tourette's and the difference between the haves and have-nots but it is also about accepting and understanding your own Tourette's which are within all of us and befriending it so that a right attitude towards life and all makes one happy."

Debutant Aayush Sharma, who hails from Mandi in Himachal Pradesh, says his journey from a small town to a city like Mumbai has been interesting as he has gone through his share of ups and downs.

"The journey from Mandi to Mumbai has been a very interesting one. I've gone through my share of ups and downs in Mumbai which is home now, but I will always be a Mandi boy. When I was assisting on Tubelight, we were travelling across Himachal. But shooting in Mandi would be something that would be very special to me," Aayush said in a statement.

The actor says he would love to have the screening of his maiden film Loveratri in Mandi.

"Even for my upcoming film Loveratri, I would like to have a special screening there since watching it with all my people from Mandi would be very special," he added.

Harshvardhan Rane says there may be a wee bit similarity between his role in a forthcoming yet untitled Telugu film and that of the character essayed by Ryan Gosling in Drive.

Harshvardhan's look from the movie bears some resemblance to Gosling's stuntman-turned-driver look in Drive.

On this, Harshvardhan said in a statement, "I really do not know how to react about the comparison it makes me smile though, but to be honest there might be just a tiny bit similarity when it comes to the profession of my character in this film and his character in Drive."

The actor, who is eagerly awaiting the release of Paltan, has earlier been a part of two Telugu blockbusters Fida and Geethanjali.

Sanju to have a sequel?

Ranbir Kapoor starrer Sanju is doing wonders at the box office. Apparently, Sanjay Dutt has told Rajkumar Hirani that many shades of his life have not been shown in the movie and requested him if he could make a sequel to it. To this, Hirani told a leading media channel, “A person can have only one biopic.” The film has crossed Rs 200 crore mark in just seven days and is now heading towards the milestone of Rs 300 crore. I will soon beat Padmaavat and become the highest grosser of the year.

Zero to clash with The Accidental Prime Minister

Movie clashes at box office are quite common these days.  In the past, we have had big movies clashing at the box office. The upcoming movies to clash are Shah Rukh Khan’s Zero and Anupam Kher’s The Accidental Prime Minister. Both the movies are slated to release on 21 December. This is not the first time that SRK’s film is having a clash. Previously, his Raees had released with Hrithik’s Kabil and Dilwale with Bajiro Mastani. Now we will have to wait to see which among these movies will be a success at the box office.

Katrina Kaif is busy with the Dabang Reloaded world tour in USA. But she has managed some time to meet her friend Zoya Akhtar. The actress has shared a photo of the meeting on her Instagram profile.

These beauties..... oh and the ultimate style guru my favorite @arjunbhasin #zindaginamilegidobara #reunited

Karan Johar never leaves a single moment to share some adorable photos of his kids online.  Recently, Karan shared a photo of Varun Dhawan spending good time with his son Yash Johar. Karan also shared a Boomerang video of Yash enjoying the serene wind. He captioned, "Gone with the wind." 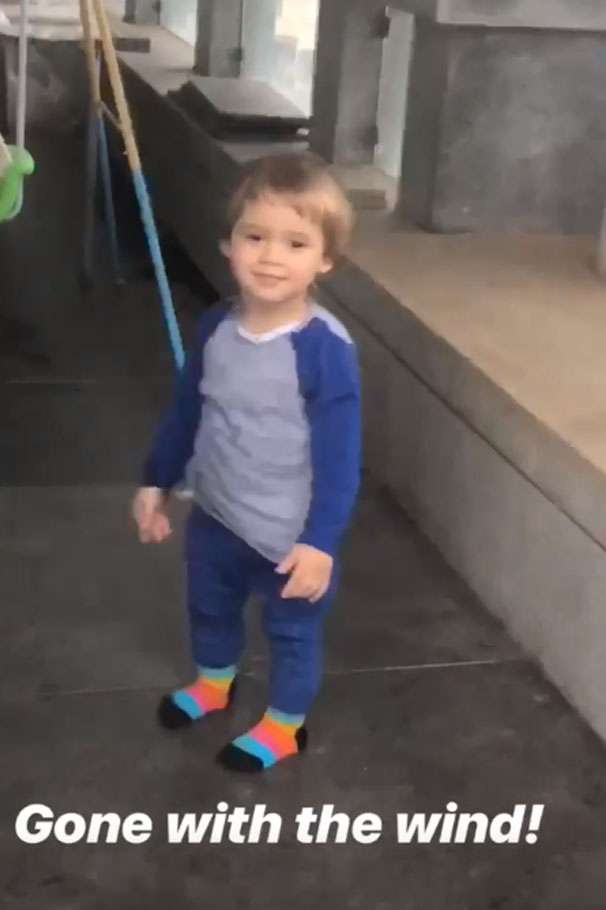 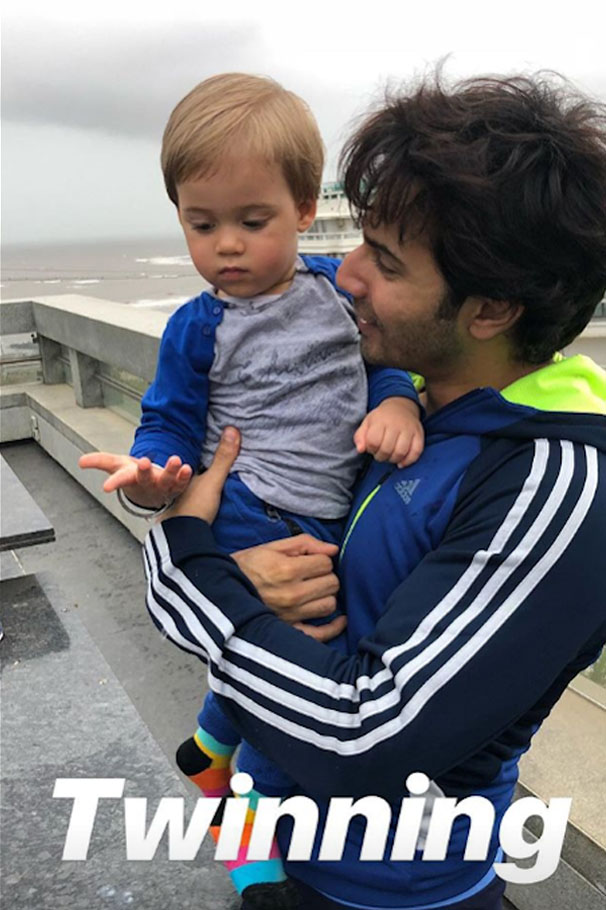 Many Bollywood actors have been part of Madame Tussauds Wax Museum in Singapore. Now joining the actors will be Anushka Sharma but with a twist. Anushka Sharma is the first Indian to get an interactive statue at the wax museum in Singapore which is sure to wow the visitors. According to some sources, it will be a massive interactivity feature that Madame Tussauds is adding to her wax statue. Only a handful of global power leaders/icons have other forms of interactivity attached to their statues and this move by the museum is a huge salutation to Anushka’s global fan.

Saif and Sara to come together for a movie

Saif Ali Khan and his daughter Sara Ali Khan will be seen in Nitin Kakkar’s next venture, if rumours are to be believed. The story of the movie revolves around the relationship between a father and his daughter. Both Sara and Saif have liked the script. They are yet to give their nod to the film. It will be interesting to see the father and the daughter together on screen.

Devdas, one of Sanjay Leela Bhansali’s most successful movies, completes 16 years since its release. Madhuri Dixit shared a photo of the movie expressing her memories and how proud she is to be a part of the movie.

Throwback to #Devdas which will always be a film very close to my heart! From working with all the talented actors and technicians, to the dances, to wearing some of the finest outfits and excellent performances. It was so much fun to be a part of this beautifully crafted film #16YearsOfDevdas @iamsrk #SanjayLeelaBhansali @aishwaryaraibachchan_arb

My Princess Angel’s Happiness means the World to me My Aaradhya...My LIFEMy Eternal LOVE

A post shared by AishwaryaRaiBachchan (@aishwaryaraibachchan_arb) on Jul 11, 2018 at 3:18am PDT

We made it!!!! #disneyworld #orlando #florida Years ago I brought Renee here & this trip Alisah & Aaliyah @aaliyahsenb8 A big off my bucket list for all the babies!! #magickingdom with magical people!! wonderful #memories #holidaydiary2018 #happiness #family P.S. smile na Neel!!! love you guys!!

The team of Pataakha wrapped up its shooting. Pataakha is a comedy-drama about two sisters, Badki and Chhutki. It is based on an acclaimed short story by renowned writer Charan Singh Pathik. It is directed by Vishal Bhardwaj and produced by Vishal Bhardwaj Films LLP and Kyta Productions. It stars Sanya Malhotra, Radhika Madan, Sunil Grover and Vijay Raaz. The film will release on 28 September, 2018.

Monsoons are here in India – with all its romantic connotations. One cannot think of Bollywood without rains with all its sultry numbers with sari-clad actresses dancing in the drizzle. Bollywood and monsoon have a crazy connection. Monsoon is on and many actors shoot videos while dancing in the rain. In fact, there are celebrities who love enjoying rain with music. Model cum actress Heena Panchal, who looks like Malaika Arora Khan, has come into limelight these days. Her pictures and videos on the Bollywood famous song “Tip Tip Barsa Pani” are going viral. She got wet in the rain, and looked very sexy and sensuous.

Priyanka Chopra on Thursday wished her brother Siddharth on his birthday, saying he reminds the actress of her late father Ashok Chopra.

"Hey hey little brother... Happiest birthday and all my love and luck. You have turned into such a special man. I am so proud of you and love you. You remind me so much of dad. Thank you for your kindness and epic party last night! See you as I am back. Love didi," she tweeted.

On the acting front, Priyanka will be seen in the Salman Khan starrer Bharat and has also been roped in for Shonali Bose's The Sky Is Pink.

Sikandar on Thursday took to Twitter, where he shared a photograph of himself along with Jackie from the sets of Romeo Akbar Walter ("RAW") in Gujarat.

"When he is a stud and you are a muffin, you know what you are going to get... Stud Muffins. On location 'RAW'," he tweeted.

Sikandar will be seen playing an antagonist in the film.

Hey hey lil bro.. happiest birthday and all my love and luck.. you have turned into such a special man.. I’m so proud of you and love you. You remind me so much of dad. Thank you for your kindness...and epic party last night!! see you as I’m back.. love Didi Ps... #birthdaypunches are so much fun @siddharthchopra89

Top Stories
Kabhi Kabhie Ittefaq Sey: Upcoming Major Twist! Anubhav’s major step, Gungun to be the first wife
MUMBAI: Star Plus’ popular show Kabhi Kabhie Ittefaq Sey is loved immensely by the masses. The storyline brings back...
Super Sexy! Hina Khan makes netizens drool over her latest photoshoot
MUMBAI: TellyChakkar is back with yet another fashion update from the telly world.Also read ...
Exclusive! Garima Vikrant Singh roped in for Amazon Prime Video’s Crash Course
MUMBAI: With the rise in consumption of content we can see some amazing projects are being made across platforms in...
Exclusive! “People have reconnected to themselves during covid and that is why they will love the show” Pankaj Jha on his web series Nirmal Pathak ki Ghar Wapsi
MUMBAI: Actor Pankaj Jha has been winning the hearts of the fans over the time with his amazing acting contribution, we...
EXCLUSIVE! Ulka Gupta and I share a sibling bond in real life as well: Banni Chow Home Delivery actor Ansh Pandey
MUMBAI: Ansh Pandey is a talented actor who has recently started his career on television. He is currently seen in Star...
Must Read! Priyanka Chopra was convinced to work in Farhan Akhtar’s Jee Le Zara for THIS reason
MUMBAI: The three biggest names of Bollywood have come together for Farhan Akhtar's Jee Le Zara. Priyanka has now...
Recent Stories

Must Read! Priyanka Chopra was convinced to work in Farhan Akhtar’s Jee Le Zara for THIS reason
Latest Video