Chit-chat with Kunal and Meghna- Sangeita Chauhaan and Sahil Uppal

In conversation with Swabhimaan actors Sangeita and Sahil about their experiences and a lot more...
Submitted by Anwesha Kamal on Sat, 05/06/2017 - 11:00

They are skilled actors, their sizzling on-screen chemistry makes fans go crazy, and they are fun loving and amazing co-stars.

Yes, we are talking about the newest on-screen couple of T-town, Sangeita Chauhaan and Sahil Uppal, who are currently essaying the roles of Meghna and Kunal, in Colors’ popular daily Ek Shringar Swabhimaan (Rajshri Productions).

Lovingly called as Sahita/Meghnal by fans, Sahil and Sangeita set an example of great co-stars. Tellychakkar.com recently had a fun chit chat with the duo, and they shared some interesting experiences and facts about each other in the conversation.

We are sure you guys are going to have a gala time reading it. Read on -

How has been your experience of shooting with each other so far?

Sangeita – He always starts like this and then goes ahead…

Sahil – She irritates me a lot but she is a good and supportive actress. We have become good friends now, but initially, I didn’t imagine that I can become friends with her (laughs).

Sangeita – Initially, we used to be very quiet.

Sahil – Both of us have similar traits and it always happens that when you start bonding well with a person, you don’t hesitate to do any kind of masti. I can say anything to her and keep doing masti. We also make each other feel comfortable during romantic scenes, and it is visible on-screen as well. People even like our interviews. So that’s how we share a good bonding with each other. 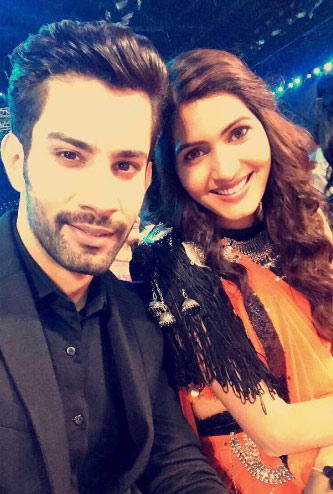 Who among you cracks jokes in the middle of a scene while shooting?

Sahil – I like to be serious while I am doing my scene especially when I am shooting for a serious one. I prefer to be quiet then.

Sangeita – We always make sure that we shouldn’t disturb the person whose scene is next. We keep cracking jokes and doing masti with others till they are not in front of the camera.

Sahil – She can keep switching on and off herself while shooting. She can be crying in a scene and can automatically crack a joke when the director says ‘cut’ but it doesn’t happen with me.

Sangeita – I have understood that; and whenever he is in a serious mood, I leave him alone.

Sahil – I am not a good actor, who can break the mood of a scene; I am still learning. When I will learn it,we will crack jokes aur rote rote hum hasne lag jayenge.

What was your reaction, when you met each other for the first time?

Sahil – Sangeita had fallen in love with me but I was thinking that this girl is too tall.

Sangeita – Actually, he had fallen in love with me and was thinking that this girl is so tall isi se pyaar hona tha mujhe (laughs)?

Sahil – I thought she is tall but I am taller than her so that wasn’t any difficulty. I was just hoping that she shouldn’t be taller than me.

Sangeita – During the first day of shoot in Jaipur, I was thinking that he is shorter.

Sahil – In the beginning, my only concern was that I shouldn’t look shorter than her. I am used to standing in a relaxed position and thus get little conscious. I have always shot with shorter girls and it’sgreat that I found her. 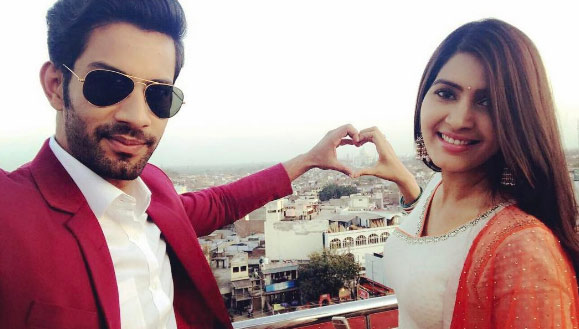 One thing you like and dislike about each other?

Sahil – Hmm…difficult question (chuckles). She is a strong girl, a good human being and a good actress. I was asked to tell only one and I shared three. She has more qualities like these.

What I dislike about her is that she gets bothered very quickly and then keeps on thinking about it. I get irritated when we are in a scene, and she is lost. I feel like telling her that come and do the scenes first, then go back to your wonderland.

Sangeita – (laughs) He thinks that I change the mood of the scenes. Sahil is honest and a good human being else I would have not become friends with him. He is a good actor as well and his technical knowledge is quite strong. He understands everything about the lights and camera angle and he helps me with it. I am learning from him. He has a very attractive voice, he just needs to focus a little more on modulation.

Sahil – Yes, I am learning that from you.

Sangeita – Yes, I will train you (laughs).

Sahil – Even she has a nice voice. She has a good base in her voice.

Sangeita - There is nothing that I dislike about him. He just keeps doing masti and sabse pange leta hai! Whenever he gets angry, it makes me wonder how can he spoil his mood so quickly! He is also very honest and on his off-days, he will come upfront and say that I am not in my elements today. I think there is nothing to be disliked about him.

Sangeita – They played a prank on me and they vconvinced me to fall for it (makes a face).

Sahil – Some people in our unit had planned to go to Lonavala. So Samridh (Bawa) and I refused to go.

Sangeita – I was clear on my point that I will go there only when Sahil, Samridh and Ankitta (Sharma) will go, else I won’t. So knowing that they aren’t going, I also opted out from the plan.

Sahil – Later on, Samridh and I told her that we are going.

Sangeita – They got a good scolding from me for I had already made another plan. But I told them that if you guys are going, then I will join you all.

Sahil – And then we told her we were just kidding; we are not going.

Sangeita – I again yelled at both of them (laughs).

Even I had played a prank on him. Once Sahil realized that he spoke a lot in an interview, so he was saying sorry to me about it. Then I told him you could have thought about it before. Now you have already spoken a lot in front of the camera. He was shocked and I couldn’t stop laughing seeing his face.

Sahil – I thought she was serious; thankfully, she didn’t feel bad about it. 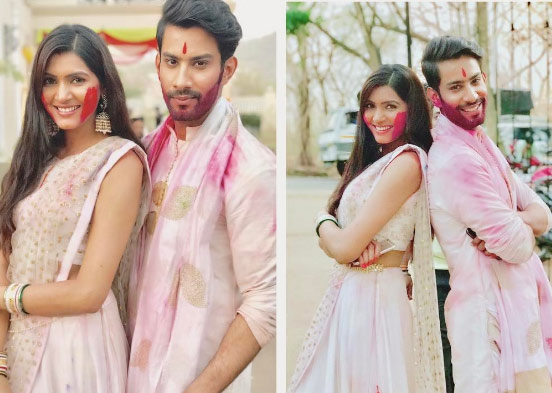 Reveal any hidden talent of your co-star.

Sahil – I think fans don’t know she is a good cook.

Sangeita – He makes good tea and I have had it.

Yeh bada mazaakiya hai!!! At first impression, people will feel he is very sincere and quiet but when you start talking to him, you will feel how witty he is!!!

Sweetest thing your co-star has ever done for you?

Sahil – I love Oreo biscuits and she has got them for me, so I think this is the sweetest thing she has ever done for me, and my presence itself is a sweetest thing for her.

Sangeita – (laughs) He is very understanding. Sometimes when I am lost in my own thoughts or I am sad, he understands and cheers me up.  I find it quite sweet.

Share the best compliment received by fans so far?

Sahil – A fan once called me a Tantrik – Ap jaadoo kar dete ho mujhpar!!! I found that compliment quite creative, and I still remember that. People like our pairing, even in the interviews, so they like real Sahil – Sangeita as much as Meghna – Kunal too, so that’s a good thing.

Sangeita – I feel good to read that they liked my acting and they could relate to it. It’s a big thing for me. Whenever I get compliments like you are a good actress, or I cried along with you in a particular scene, that becomes the best praise for me.

Sahil – She cries so well.

Sangeita – I am good at getting angry too (laughs). 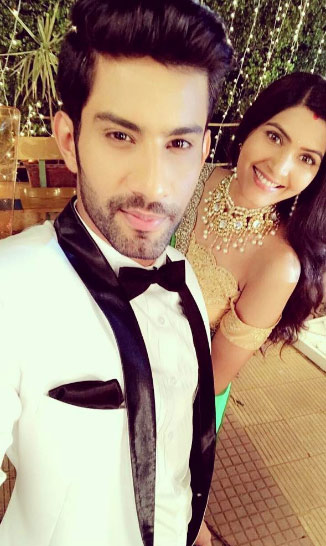 Message for your fans?

Sahil – A big thank you for liking us. We feel really happy to get your messages.

Sangeita – We do care about your tweets to us and we try to work upon your suggestions. We do read all your tweets.

Sahil – Sometimes we don’t get time to reply but we read all the messages. So keep messaging and loving us. Your tweets are important to us.

Sangeita and Sahil – Thank you and we love you all.

Top Stories
Wow! After 13 years Rajshree Thakur meets this co-star from her debut show, Check out
Mumbai: Rajshree Thakur is ruling several hearts with her performance as Pallavi in Sony TV's recently released show...
WHAT! Priya aka Disha Parmar to get replaced by This actor in Bade Achhe Lagte Hain 2?
MUMBAI:  TellyChakkar is back with yet another update from the telly world. Ekta Kapoor's popular drama series Bade...
OMG! This actor from GHKKPM is third-wheeling with Aishwarya and Neil, Check out
MUMBAI: TellyChakkar is back with yet another update from the telly world. Ghum Hai Kisikey Pyaar Meiin is currently...
EXCLUSIVE! 'Fans can expect sincerity from Deep Malhotra' Pankit Thakker on agreeing for Bohot Pyaar Karte Hai, his character and more
MUMBAI: Mehndi Hai Rachne Waali's ace producer Sandiip Sikcand is all set to bring a new show for Star Bharat titled...
Exclusive! Savdhaan India actor Vikas Srivastava roped in for web series Bloody Valley
MUMBAI: Keeping the promise to deliver some exclusive information from the world of Bollywood, OTT, and television,...
Exclusive! Namrata Kapoor to be part of Prem Entertainment and Frames Productions next show on Star Bharat
Mumbai: Tellychakkar is back with yet another exclusive update from the telly world. You’ll already know that many...
Recent Stories