Uzair gets overwhelmed with his Ganesh Avatar

The story of the most loved god, ‘Vighnaharta Ganesh’ telecast by Sony Entertainment Television has won the hearts of audiences. Uzair Basar who essays the role of Ganesh was selected for the role after the creative team auditioned multiple child artists. Uzair also underwent training for language, diction, gestures to play the part. The series highlights the special relationship parents share with their child and the unheard stories of Ganesh’s journey from Vigna child to the most loved god. In the upcoming sequence, Ganesh gets beheaded by Lord Shiva for obstructing the path of the Gods. Post the editing along with the aid of motion capture technology, Uzair got emotionally overwhelmed after looking at the transformed divine look of Ganesh. 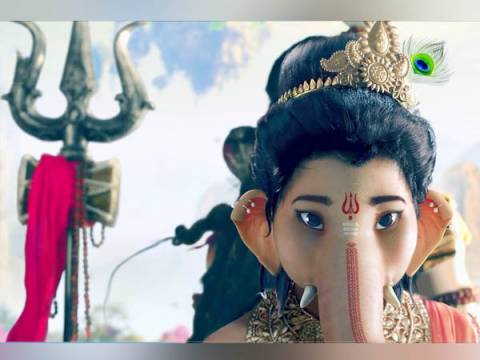 When contacted Uzair he confirms, “In the initial episodes I have been portrayed as an obstinate child who fights with different gods in accordance with Maa Parvati’s wishes. In the fight sequence with Lord Shiva, he beheads me with his trident which leads to the transformation into Lord Ganesh’s elephant headed avatar. When I saw my transformed look of Lord Ganesh, I was overwhelmed and had tears in my eyes looking at the divine avatar of Lord Ganesh on screen and I felt humbled that going forward my on-screen presence would be that of the divine version of the elephant headed God.”

Tune in to Vighnaharta Ganesh only on Sony Entertainment Television every Monday to Friday at 8 pm.

Top Stories
Channa Mereya - Romantic! Aditya and Ginni Spend a Private Moment
MUMBAI :  Star Bharat’s Channa Mereya is gearing up for some exciting drama and interesting storylines as Aditya and...
Anupamaa - Major Twist! Kinjal to Divorce Paritosh
MUMBAI: Star Plus’s popular serial Anupamaa, is one of the most loved shows on the small screens. It has been running...
Ghum Hai Kisikey Pyaar Meiin - Oh No! Sai Hurt by Virat's Bahaviour
MUMBAI: Star Plus's Ghum Hai Kisikey Pyaar Meiin is coming with exciting drama and interesting twists, as Virat and Sai...
Romantic! Fukrey actors Ali Fazal and Richa Chadha look adorable in THESE pics prior to their wedding, See pics
MUMBAI: Ali Fazal and Richa Chadha’s wedding festivities have begun. Richa Chadha took to her Instagram to share the...
R.I.P! Salman Khan’s body double Sagar Pandey passes away, the actor mourns his demise
MUMBAI: Bollywood superstar Salman Khan mourns the sudden demise of his body double Sagar Pandey who passed away today...
Bahut Pyaar Karte Hai - Exciting! Ritesh and Indu to Come Together to Defeat Kadambari
MUMBAI: Star Bharat is turning into one of the top destinations for captivating and compelling content. Their new...
RECENT STORIES

Romantic! Fukrey actors Ali Fazal and Richa Chadha look adorable in THESE pics prior to their wedding, See pics