Mumbai: Well, while everyone is taking a stand on the Kathua Gangrape-murder incident, humanity has gone the lowest. The whole incident shocked not just the nation but also the whole world. Well, if this wasn’t enough, humanity has reached another low.

Popular rapper and singer, Raftaar, who is currently seen on TV as a mentor in MTV Roadies, shared a post on his social media account. A picture that gave us creeps and chills. Basically, the victim Asifa Bano has not just become the topic of discussion on social media but also on p*rn web-sites.

Yes, you read it right!

In a leading adult web-site, amongst the trends, Asifa is one of the names, which technically means that people are interested to watch her video on an adult web-site.

Isn’t that sick and disgusting?

Well, yeah, it indeed is. On one side we’ve failed a little child while on the other side; humanity seems to be crossing all its limits. This is nothing but a proof of the eradication of humanity from this world. 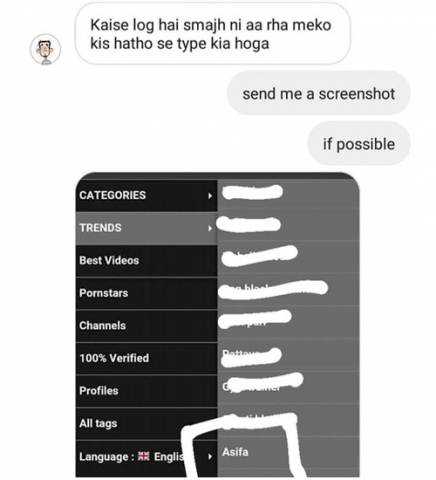 As he rightly said majority of people’s mindset is filled with filth.

Within few minutes, people started commenting by showing their hatred for the same.

What do you think of Raftaar?

What disgusts us the most is the idea of people even typing her name on such web-sites!!!

Honestly, no words can ever explain the angst, loathing and trauma we are going through after seeing this. Nothing more can justify how wrong we’ve turned into...

Condolences to such sick minded people…