MUMBAI: TellyChakkar is back with an interesting update from the world of television.

We’ve been at the forefront of reporting updates about your favourite celebrities, gossip related to them, and much more.   (Read here: Charlie Chauhan miffed with fans; shows her disappointment)

Well, Parth Samthaan needs no introduction. The actor has impressed the audience with his acting chops in many projects. Parth enjoys a loyal bunch of friends in the industry.

Charlie Chauhan and Parth were quite thick during the MTV Kaisi Yeh Yaariyaan shoot. They were seen posting pictures and making videos with each other. However, there was strong buzz a couple of years back that there’s no friendship left between the two. There were rumours of Parth and Charlie’s friendship having turned sour.

Looks like things are better between the two now. Parth shared a poetry written by Charlie Chauhan, giving the audience a hint that the duo is cordial yet again.

Have a look at the picture. 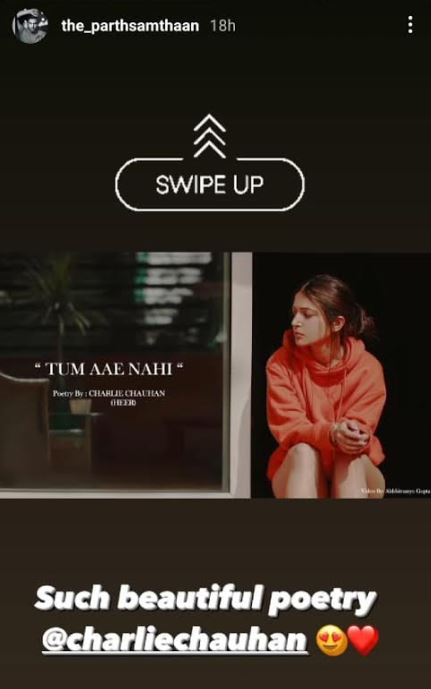 TellyChakkar got in touch with Charlie to know whether things between her and Parth are resolved, but she replied saying ‘No comments’.

We wish that the duo buries the hatchet and becomes BFFs again.

Stay tuned to this space for more updates.