Imlie: Kya Baat Hai! Sumbul Touqeer Khan shares who is the Shamsheera on the sets of the show

Sumbul and Cheeni’s bond is loved by the audience and now Sumbul shares who is the Shamsheera on the show.

MUMBAI : Sumbul Touqeer Khan is seen playing the main lead in the show Imlie. The actress has become a household name.

The audience praises her acting chops and they feel that she is one of the best actresses on television.

The actress began her career as a child actor, and at a very young age, she gained popularity.

The diva has also become a social media sensation and enjoys a huge fan following.

Sumbul has proved her mettle in acting with her stellar performance in the show.

The fans love to see her pair with Fahmaan and they love their chemistry and have termed them as one of the most loved on-screen couples.

The actress has shown her versatility in the show and she is best in emoting emotion and action scenes.

Sumbul has come a long way in the entertainment business and she has done extremely well for herself.

The actress was also part of a reality show Dance India Dance Little Masters and today she has come a long way and become the number one actress on television.

The actress is quite active on her social media account and she keeps sharing posts and keeps her fans updated on what she is up to.

Recently she shared a photo of who is the “Shamshera” on the sets of the show.

Chenni is a new character introduced in the show and she is Imlie’s daughter. The two share a great bond on the sets of the show.

There is no doubt that the audience would love the bond between Imlie and Cheeni.

For more news and updates on television and Bollywood, stay tuned to TellyChakkar.

( Also Read - Omg! Fahmaan Khan and Sumbul Touqeer Khan break their silence on being in a relationship 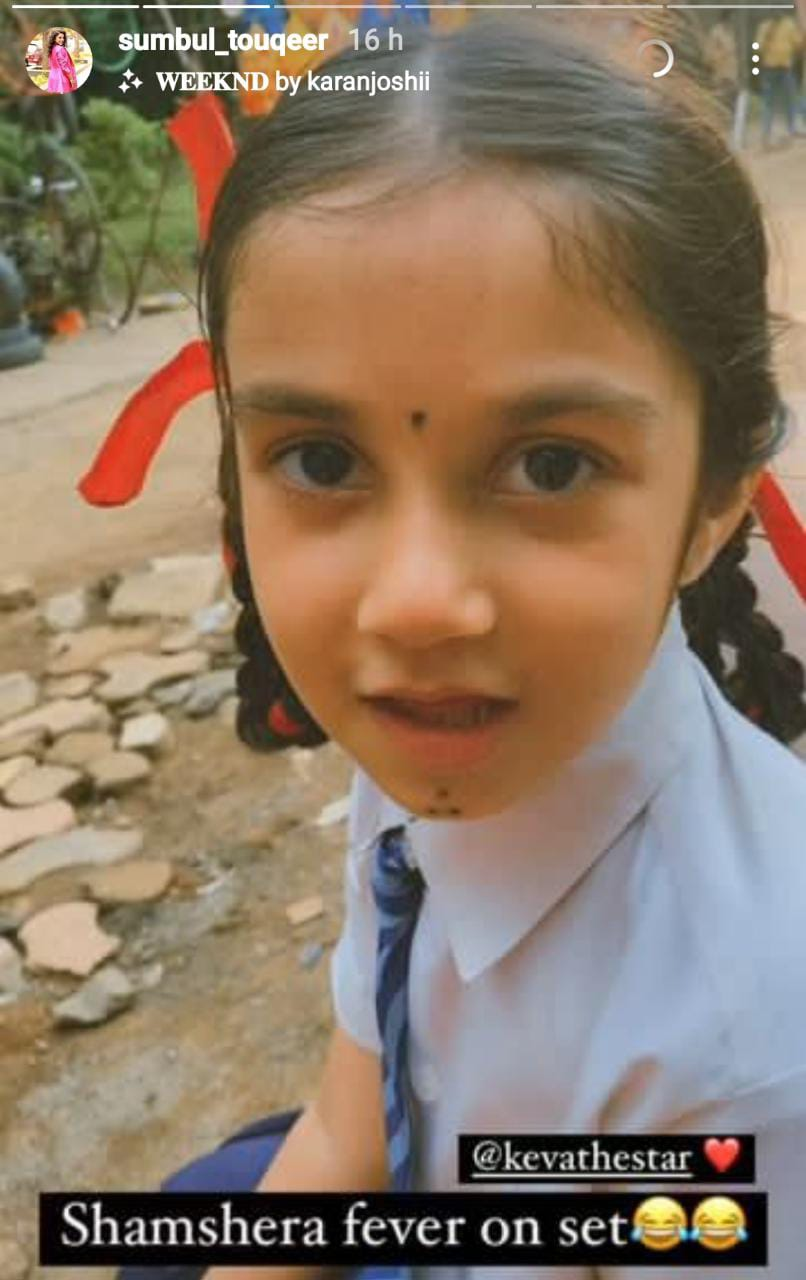 Top Stories
Pandya Store: Oh No! Chiku goes missing, Dhara to blame Rishita for his disappearance?
MUMBAI: Daily soap Pandya Store has made a place in everyone’s heart with its gripping storyline and intriguing twists...
Yeh Rishta Kya Kehlata Hai: Dharam-Sankat! Akshara is torn between Abhimanyu and Kairav, torn about revealing the truth
MUMBAI: Yeh Rishta Kya Kehlata Hai has become the longest-running TV show. Abhimanyu and Akshara are winning hearts...
'If you make a good movie, trolls can't stop people from seeing it': Milind Soman (IANS Interview)
MUMBAI: The Aamir Khan-starrer 'Laal Singh Chaddha' hit the theatres on Thursday. And the movie is evoking mixed...
Jay Zaveri on being part of Apnapan: I did not like the Shanky's character initially
MUMBAI: Actor jay Zaveri says that it took him sometime to get used to his character Shanky in the show Apnapan. The...
Aakash Talwar: I always look forward to trying my hands in different characters and genres
MUMBAI: Aakash Talwar is excited to be a part of Yash Patnaik and Mamta Patnaik’s upcoming show Control Room. The actor...
Anuj Sachdeva: Bold scenes need to be justified in the story
MUMBAI: Actor Anuj Sachdeva, who has been part of multiple web series such as Ek Extra Mile, Bin Bulaye Mehmaan Season...
Recent Stories