It's an 'emotional wrap-up' for team Dahleez

Star Plus’ Dahleez (Fortune Productions and Colosceum Media) is all set for its wrap-up this weekend. The show was unique in terms of its concept and performance values. Also, the ambience for the entire cast and crew was something out of the world, as the team of Dahleez stayed together for nearly a year in Chattarpur, Delhi. And this actually brought about an extremely close family bonding between the artists and crew members. 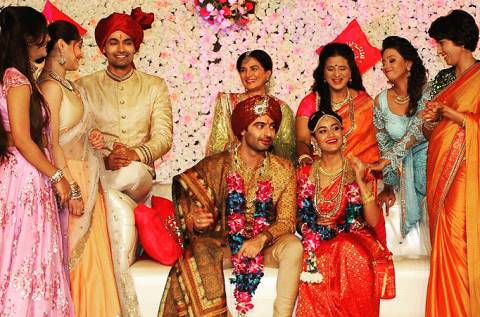 With the shoot almost wrapped up, with only minute finishing touches required of the actors in the next few days, the artists have been vocal about how they would miss shooting for the show, and being with their co-actors.

We hear that there were quite a lot of emotional moments for the actors over the last few days as they were not able to come to terms with the team’s parting.

But as they say, all good things need to come to an end!!

We at Tellychakkar.com tried getting in touch with few actors from the show to know their thought process.

Veteran actor Amit Behl who essayed the role of the patriarch in the show termed this experience as something very unique. “In my 23 years in TV, this was the first time that I was required to stay away from my family and city Mumbai for a long time. But getting a family away from family was indeed great. We faced all the highs and lows together, bared the deadly heat and winter of Delhi, sailed through the pollution problems, managed to adjust to the food and water out there. Talking about the culmination sequence that we shot, it was indeed a tough ask. The entire cast was there and we got emotional. The best part is that we have promised to stay in touch. We have our Whatsapp group active, and hope to connect with all. Overall, it was a fun journey. It was like a long film wherein we knew everything, even the ending.”

Meer Ali who essayed the role of Jaydev said, “Dahleez has given all of us lot of highs. Yes, with it ending, we will miss shooting for it. I will personally miss my entire team. I am happy to have been part of this unit.”

Protagonist Tridha Choudhary said, “Shooting for Dahleez was fun, mainly because we had like-minded people working together. I have been asked to be available for few minute sequences in the next few days. So technically, Dahleez is not over for me yet. I am a person who loves being part of finite shows, and for me, Dahleez has taken me places.”

We tried connecting to the Harshad Arora and Meghna Malik, but could not reach out to them.

Will you people miss watching the Dahleez team on air? Let’s all join in and bid them adieu for one last time....

Top Stories
Wagle Ki Duniya: Oh NO! Kiara chats with Srinivas on the Dating App
MUMBAI: ‘Wagle Ki Duniya - Nayi Peedhi Naye Kissey’ is winning the hearts of fans with its episodes based on various...
AUDIENCE PERSPECTIVE! Why Ram has HIRED Priya's sister Sandy in his company even after the bitter past in Sony TV's Bade Achhe Lagte Hain 2?
MUMBAI: Sony TV's popular drama series Bade Achhe Lagte Hain 2 is constantly entertaining the viewers with its...
Exclusive! Baalveer Returns actress Aarna Bhadoriya has been roped in for Akshay Kumar starrer Raksha Bandhan
MUMBAI: TellyChakkar has always been upfront with regards to delivering some exclusive information coming from the...
Shocking! ‘Daadi Kitna Jhooth Bol Rahi hai’ Netizens slams Neetu Kapoor on this statement
MUMBAI: Neetu Kapoor is no doubt one of the most loved and versatile actresses we have in Bollywood industry, the...
Adorable! Check out the similarity between Kinjal and Anupamaa
MUMBAI: TellyChakkar is back with yet another update from the telly world. Anupamaa has been one of the most adored...
ARYLIE GOALS! Aryan and Imlie to have a romantic dance performance in StarPlus' Imlie
MUMBAI : Imlie has done well on the TRP charts since it has hit the screens. Also read:...
Recent Stories