The new year might have been a celebratory one for the world, but the family of actor Vishal Thakkar was left aghast with him gone missing.

Tellychakkar.com had been constantly reporting about the unfortunate turn of events in the Munnabhai actor’s life.

Vishal was accused of ‘rape’ by his alleged girlfriend who also lodged a police complaint against him.

However, the couple sorted out their issues and the complaint was also withdrawn. But unfortunately, the incident left a deep scar in Vishal, who went into depression over the entire fiasco.

Vishal was also left frustrated seeing his name being dragged into search engines alongside the word ‘rape’. The actor was also said to be not getting work assignments due to this controversy.

The actor apparently left home on 31 December 2015 to watch a movie with his girlfriend, and never returned home.

We were recently forwarded a picture of his family desperately trying to trace him with the help of a missing poster. The family had filed a police complaint on 6 January, but it seems like there has been no news of him yet.

Here have a look at the picture: 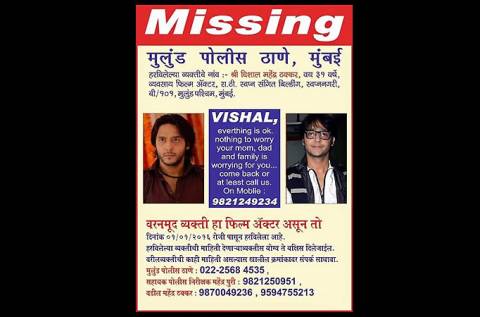 Top Stories
EXCLUSIVE! Gautam Ahuja on his character in Sony TV's Appnapan: The badass gangster vibe of Gagan made me take up this role
MUMBAI : Popular TV actor Gautam Ahuja is playing the role of Gagan in Sony TV's show Appnapan. The actor is seen as...
Tc Awards! Anupamaa, Narmada and Suman gets awarded for this category, Deets inside
MUMBAI: TellyChakkar is back with yet another update from the telly world. As we have seen in most of the serials....
Bigg Boss OTT Season 2: Exclusive! MTV Splitsvilla contestant Kat Kristian to participate in the show
MUMBAI : Bigg Boss 15 was a very successful show on television and the contestants of the show became Last year, the...
Mose Chhal Kiye Jaaye: Disgusting! Prisha tries to suffocate the babies
MUMBAI: Sony Entertainment Television’s show ‘Mose Chhal Kiye Jaaye’ is gearing up for interesting twists and turns....
Ouch! Netizens take a jibe at Deepika Padukone, Katrina Kaif post Alia Bhatt’s pregnancy announcement
MUMBAI: Bollywood power couple Ranbir Kapoor and Alia Bhatt on Monday announced that they are expecting their first...
SURPRISING! Look which popular actors of the Telly world rejected Khande Rao's role in Punyashlok Ahilyabai before Gaurav Amlani
MUMBAI : Sony TV's show Punyashlok Ahilyabai is one of the most popular shows on the TV in the current times. We have...
Recent Stories