It's been quite some time that Paras is not seen in the show and the audience seem to be missing Jiya and Paras’ chemistry.
Submitted by ShachiTapiawala on Thu, 05/13/2021 - 11:25

MUMBAI: SAB TV show Kaatelal & Sons recently went on air and the show has kept the audience hooked to the television screens within a short span of time.

The lead pair of the show Susheela and Pramod is played by Jiya Shankar and Paras Arora. We all know how well they bond and the comfort they share with each other. In an exclusive interview with Tellychakkar.com, Jiya had confessed that shooting with Paras is effortless. The duo didn't hit it off from the day they met but their journey has been the one that nurtured with time. Jiya and Paras are popularly and lovingly called ‘Sumod’ (Susheela and Pramod).

It's been quite some time that Paras is not seen in the show and the audience seem to be missing Jiya and Paras’ chemistry. A fan took to social media to share that she really misses the bond of Sumod and that Paras should return to the show soon. She mentioned that she is excited to see her favourite couple. 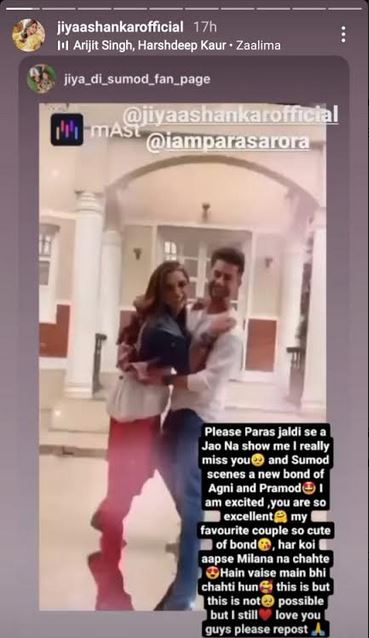 Kaatelal & Sons narrates a tale of Dharampal Thakur, who lives with his twin daughters Garima and Susheela and owns a haircutting salon. However, things change when the daughters decide to run their father's business. The show premiered on 16 November 2020. It was produced by Contiloe Pictures Private Ltd, and stars Megha Chakraborty, Jiya Shankar, Ashok Lokhande, Sachin Chaudhary, Paras Arora and Sahil Phull in pivotal roles among others.

Top Stories
Throwback! Munmun Dutta is in love with THIS part of her body, and the reason will surprise you
MUMBAI: Taarak Mehta Ka Ooltah Chashmah fame Munmun Dutta has earned fans for her flawless beauty. But surprisingly,...
EXCLUSIVE! Harphool Mohini has given me a chance to explore myself as an artist: Amal Sehrawat
MUMBAI: After 'Choti Sarrdaarni' got over, Amal Sehrawat decided to take a break. The actor had his own reasons to do...
EXCLUSIVE! 'I would be overjoyed if I become Rohit Sir's favourite' Jannat Zubair gets candid about Khatron Ke Khiladi 12's stunts, her bond with Rohit Shetty and more
MUMBAI: Khatron Ke Khiladi is one of the most loved reality shows on television and the show has had a successful run...
Exclusive! Understanding Saahir's psyche was the most difficult thing for me: Gaurav Arora aka Saahir of Aadha Ishq
MUMBAI: Voot Select’s new original series ‘Aadha Ishq’ is a story of a madly-in-love couple, Sahir (Gaurav Arora) and...
Shocking! This is what happened when Salman Khan and Abhishek Bachchan met at Karan Johar's birthday bash
MUMBAI: Karan Johar turned 50 recently and made sure to celebrate in a grand way. The ace filmmaker had hosted a grand...
EXCLUSIVE! I wanted to become an IPS officer, I hail from a small town and not everyone has a broad mind in smaller cities: Kabhi Kabhi Ittefaq Se actress Sonia Sharma
MUMBAI: Sonia Sharma is a talented artist.(Also Read: ...
Recent Stories

Shocking! This is what happened when Salman Khan and Abhishek Bachchan met at Karan Johar's birthday bash
Latest Video