Aham and Monica talk about their Manmarziyan

Aham and Monica talk about their Manmarziyan

Star Plus is all set to launch Manmarziyan, a new show by Swastik Pictures. Here, meet the leads Monica Sehgal and Aham Sharma as they talk about their show, their characters and their MANMARZIYAN.

As we all know that,,he is an

Permalink Submitted by Megha Bagchi (not verified) on Sun, 05/31/2015 - 13:41
As we all know that,,he is an excellent performer as Angraj Karn in Mahabharat. Aham Sharma is also a hardcore disciplinarian,workaholic and owns a great charismatic personality,looks and is an actor of exceptional calibre and is sincere and takes his job earnestly and very passionately. In the show,Manmarziyan he has been offered a dark role but he has been most effective in pulling off even this kind of role. Kashmira Irani who plays Samaira in the show has also been offered a meaty role and she is pulling the role with ease and so is her co actor Shravan Reddy playing a strong outright personality(Of MTV Splitsvilla Fame). Unfortunately enough on the other hand,, Monica Sehgal who plays Radhika a small town girl with a vision set on her mind and eyes,full of passion and integrity who is the protagonist of this show,,is seen always nagging and sobbing and not being able to express herself and showcase herself as Radhika, a girl driven with passion earnestly,, so that people watch the show only for her as she is the protagonist of this show. Her character though is the pivotal character on this show,,is being pulled apart and away by her co stars Aham,Shravan and Kashmira on behalf of her. Although she is the protagonist of this show. I have a message for Monica hereby,,that she should take her pivotal and meatier character on new heights with utmost sincerity and eagerness and not resort to mere wailing and all that gives her co stars more popularity than her and so,,due to her all these discrepancies eventhough she looks great,,she does not fit in the character as the protagonist of this show casted opposite Arjun Sir,,Aham Sharma.

Top Stories
Channa Mereya – What! Amber to Tamper the Evidence
MUMBAI: Star Bharat’s Channa Mereya is all set to keep its audience hooked to their screens with its exciting storyline...
Hot! Gulki Joshi Raises the Temperature with these Sexy Looks
MUMBAI: Maddam Sir fame Gulki Joshi sets Instagram on fire with these amazing posts on her profile. The actress...
Apnapan: Upcoming Drama! Pallavi gets shattered to see Sonali performing arti with Nick
MUMBAI : Sony TV’s Apnapan is going to be full of drama in the upcoming segments with Sonali's entry. Currently, it is...
Bade Achhe Lagte Hain 2: Woah! Pihu chooses Ram over Priya and Krish
MUMBAI: Sony TV's popular show Bade Achhe Lagte Hai 2 is coming up with exciting drama and interesting twists. Also...
Back from Venice, Hrishitaa shares how world perceives Indian cinema
MUMBAI : From being a panelists at Venice International Film Festival 2022, bagging the Akshay Kumar-starrer '...
Kundali Bhagya – Oh No! Sherlyn Manipulates Rishabh against Preeta
MUMBAI: Zee TV’s Kundali Bhagya is coming up with a lot of drama and twists and turns in its upcoming storyline, with...
RECENT STORIES 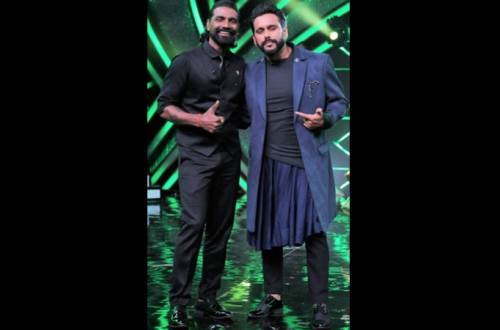