Shibani Dandekar and Farhan Akhtar set major relationship goals. The former has got the latter’s name tattooed on her neck.
Submitted by TellychakkarTeam on Fri, 08/27/2021 - 12:57
movie_image:

MUMBAI: Farhan Akhtar and Shibani Dandekar are the hottest couple in B-town. The actor-director and the VJ are head over heels in love with each other.

Their love-filled pictures give couple goals to their fans and followers.

And now, Shibani Dandekar got Farhan Akhtar’s name tattooed on her neck. 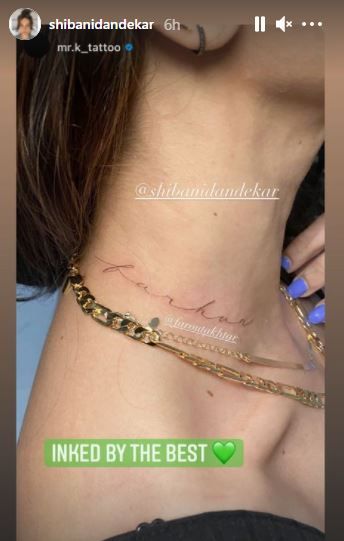 The television host took to Instagram Stories and shared a glimpse of the new tattoo with her fans. Even though her face isn’t visible in the pictures, fans can see a clear look of her new tattoo, ‘Farhan’ which is written on the side of her neck.

ALSO READ: Shibani is all praises for Farhan Akhtar

Shibani shared the pictures and wrote, “Inked by the best.” The original post was shared by tattoo artist Mr K who had tagged both Shibani and Farhan Akhtar. Shibani had dedicated this tattoo to the Toofaan actor on her 42nd birthday. In another picture shared by Shibani, she can also be seen getting a tattoo inked on her hand.

The couple has been dating each other for the last three years. Earlier this month, Shibani talked about marrying Farhan in conversation with Bollywood Bubble and said, “Everybody is asking me that question. Honestly, the topic has not come up, but I have told people that I will figure it out and let you know. As of now, there’s nothing to it yet.”

On the professional front, Shibani was last seen in Love In The Times Of Corona. She was also seen in series including Four More Shots Please and Hostages. Farhan, on the other hand, was last seen in Toofaan along with Rakul Preet Singh.

ALSO READ: Shibani Dandekar gets trolled but Farhan trends online; netizens say she is nothing more than Farhan Akthar’s girlfriend

Top Stories
EXCLUSIVE! Adhik Mehta to enter as Pakhi's boyfriend in Anupamaa; new track to unfold in the show
MUMBAI: Two years and Anupamaa hasn't left the top shelf of the TRP ratings, the performances are indeed breathtaking...
Glamorous! Reem Shaikh rocks these High-slit outfits. Take a look!
MUMBAI: TellyChakkar is back with yet another fashion update from the telly‐world.Also read: ...
EXCLUSIVE! Pandya Parivaar and the Rathores to be the next participants of Ravivaar with Star Parivaar
MUMBAI: TellyChakkar is back with an exciting update from the telly world.Also read:...
Yeh Hai Chahatein: Woah! Preesha vs Revati, Preesha determined to save her family
MUMBAI: Yeh Hai Chahatein is a passionate love story between a famous rockstar, Rudraksh Khurana, and a gynecologist,...
Kya Baat Hain! This is how Ankita Patel, Mahhi Vij, Anita Hassanandani, Kishwer Merchant, and many more telly-town mothers spend quality time with their angels
MUMBAI: TellyChakkar is back yet another time with an amazing update from telly town.Also read: ...
AMAZING! Shooting in a place where you belong brings back so much nostalgia and my heart was overwhelmed with this experience: Mudasir Bhat on shooting for Crackdown season 2
MUMBAI: Finally the wait is over and Crackdown is back with its season 2 and so is your Kabir !(Also Read:...
Recent Stories

Interesting! Check out these Bollywood celebs who fell for much younger women
Latest Video