OMG! This is why Shruti Seth married Danish Aslam 4 times

Danish in his recent social media post come's up with his interfaith marriage story with actress Shruti Seth
Submitted by TellychakkarTeam on Tue, 06/29/2021 - 11:41

MUMBAI: Filmmaker Danish Aslam got married to Shruti Seth on October 10, 2010. Danish shares many details of his and her stories. From meeting up to getting married he expresses all of the details.

It was on 10-10-10 (October 10, 2010) that filmmaker Danish Aslam and actress Shruti Seth got married. While he has films like Break Ke Baad, Shruti is known for portraying Jiya in Shararat on the small screen. Together, they make a couple that can make anyone fall in love with love!

Danish, in a recent post on India Love Project's Instagram page, opened up about his love story with Shruti like never before. From the first time they met to how they got married to their life together, Danish talked about it all.

The director revealed that they first met on a shoot. Within nine days and 50 texts a day later, they started dating on October 9, 2005. "I know this because exactly 5 years and a day later, we got married on the extremely cheesy date of 10-10-10. Which gives neither of us any excuse to ever forget an anniversary!" mentions Danish. The director shared that according to her (Shruti) it was on the set of Fanaa that they first talked. A sweet incident involving a mic in his back pocket led to texting each other within a day.

Danish is a Muslim by birth and an atheist by choice. While on the other hand, Shruti is a Hindu by birth and a spiritualist by evolution. "These were the two most singularly unimportant facts about each other when we fell in love," he said. 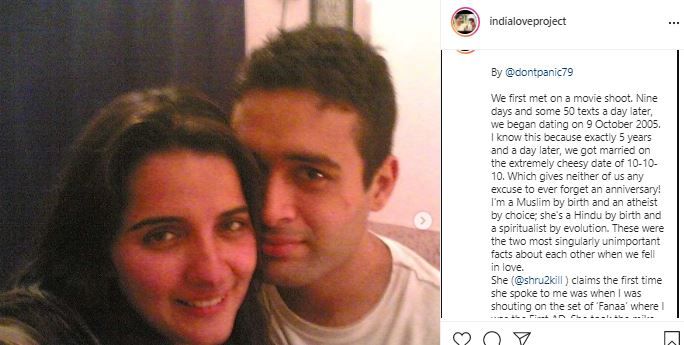 Expressing about their respective religions, Danish shared that they ended up marrying not once, but four times. He quotes, "Although religion did rear its ugly, inconsequential head briefly (parental approval wasn’t immediately forthcoming) it was quickly resolved. Our wedding was on the beach, involved dancing down the aisle, an exchange of vows, just our closest friends, and a 3-day party. This, of course, was preceded by a court wedding in BKC under the SMA (an experience designed to make you reconsider love, marriage, and the very act of living) and followed by parental receptions for “people who need to be invited”.

So, we’ve been married four times over and if we’re still together, then this is obviously for keeps."

He further mentioned about his daughter, who he shared, worships Mother Earth and "gets equally excited about Ganpati as she does about Eid and Christmas–mainly because of the desserts though."

In the end, Danish said, "Her name has both of ours at the end. And now, she is our religion."

Top Stories
GREAT NEWS! AbhiRa to recreate their Pre-Wedding shoot in the hospital amid Kairav and Anisha's wedding in Yeh Rishta Kya Kehlata Hai
MUMBAI : Yeh Rishta Kya Kehlata Hai has become the longest-running TV show. Abhimanyu and Akshara are winning hearts...
Nima Denzongpa: Amazing! Nima makes momos for Virat, gets praised just like before
MUMBAI: Nima Denzongpa is one of the most loved shows on television and it’s a story of a girl from Sikkim who falls in...
OMG! Lock Upp fame Anjali Arora surfaces headlines due to her MMS video that goes viral
MUMBAI: Tik Tok star Anjali Arora, who rose to fame with Ekta Kapoor's Lock Upp, is in news for her alleged leaked MMS...
Exclusive! Actors Vaishnavi Mcdonald and Aman Yatan Verma team up for Meri Rammaa – Sabse Special
MUMBAI: TellyChakkar is back with yet another interesting update.TellyChakkar has always been at the forefront of...
Exclusive! Yeh Rishta Kya Kehlata Hai actress Niharika Chouksey roped in for Boney Kapoor's next starring Janhvi Kapoor and Sunny Kaushal
MUMBAI: Tellychakkar has always been at the forefront of bringing you exclusive news from the world of entertainment....
Tragedy! Bollywood actress Tabu gets injured while performing a dare-devil stunt in Ajay Devgn’s Bholaa
MUMBAI : Bollywood actress Tabu who was last seen in Kartik Aaryan starrer Bhool Bhulaiyaa 2, escaped a major injury...
Recent Stories