Murky is the word!!!

And when there is muck lurking around, industry sources start working overtime and phones ring louder than ever at the Tellychakkar.com newsroom.

Two names, two forces, two biggies in their own space, have locked horns, - Parth ‘the youth sensation’ Samthaan and Vikas ‘the creative man’ Gupta -- and the battle is getting dirtier and dustier.
Parth made headlines for his alleged involvement in the creation of a scandalous Whatsapp Group, a story which was exclusively broken by Tellychakkar.com (read here: CONTROVERSY over SALACIOUS WhatsApp group allegedly created by Parth Samthaan)

The sordid story created ripples in the industry, with all quarters taking notice of the shoddy happenings in the glitz world.

Cut to next scene!!!

Today morning flashed the news of Parth filing a police complaint and sending a legal notice to Vikas levelling charges of molestation, threat on his career and non-payment of dues.

For those who came in late, Parth and Vikas were joined at the hip. They were inseparable. Vikas, an already established name in the television industry with an experience of about a decade, helped Parth early on in his career, got him some plum roles, and make a mark.

It’s also undeniable that Parth is a talented fella.  His charming demeanour with a dash of attitude have made him a youth sensation.

Vikas and Parth shared a relationship so strong that it generated feelings of jealousy and awe in many.

But their story did not have a fairy tale ending. There was no ‘happily ever after’.  What was once special, became vicious. Hatred and loathing filled the veins which once saw emotions of affection and admiration.

Vikas and Parth are now fierce adversaries, out there to get each other’s jugular.

“The revelation of the public fight has shocked the industry. It’s a case of friendship gone terribly awry. It’s going to get uglier in time to come unless the two mutually decide to settle the dust,” said an industry expert on grounds of anonymity.

Now, when media spoke to Parth, he denied levelling any molestation charges on Vikas.

Tellychakkar.com would like to share with its readers that Parth is apparently not telling the truth. The snapshot below shows Parth indeed accused Vikas of molestation. We are in exclusive possession of the legal complaint that Parth sent across to Vikas. Our sources have confirmed the veracity of it.

The document shows multiple charges which have been levelled against Vikas, which are really serious.

The legal notice also questions the professional integrity of Vikas, his sexual orientation, him being an obsessed dishonest person, of criminal intimidation, forgery and even abetment to commit suicide. 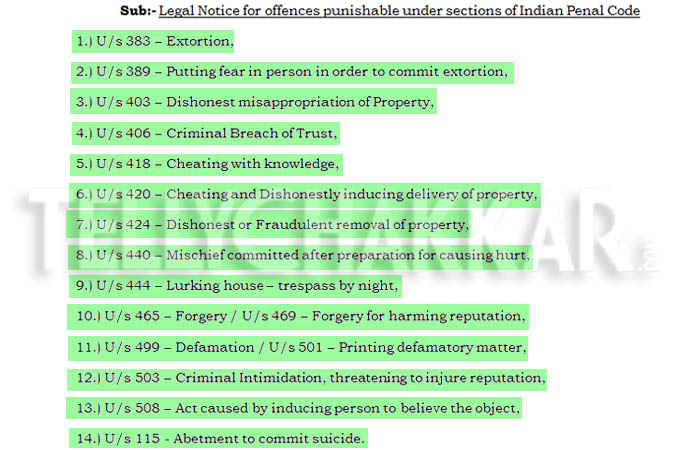 The accusations are grave and it certainly suggests that it’s going to be a long drawn court fight with Vikas’s lawyer already saying he will counter sue if a suit is brought up against him.

So what really happened between the two? Two souls so close to each other, why are now thirsty for each other’s blood? Why would Parth lie about the legal notice? What is he trying to hide or protect? All this controversy, will it harm Vikas’s prospering career as a TV professional?
Many queries and answers will unravel one by one.

We did try to get in touch with Vikas for a comment but he remained unavailable.

We also reached out to Parth and even after repeated attempts he did not choose to comment till the time of filing the article.

Only time will tell what will unfold next. Whatever be it, Tellychakkar.com will keep a close eye on further developments.

Permalink Submitted by nishid (not verified) on Wed, 12/30/2015 - 20:16
Wow! Superb! Read tc articles carefully! All articles r against Parth only, not VG, utarsh n Karan! Didnt know that TC had so much "access" Quite obvious who has leaked these dox. VG plays real dirty! TC is chammchaa of VG! always against on celebrities fans! so don't care about tc posts! loollll not reliable

exactly if VG is so much

Permalink Submitted by siddharthi (not verified) on Wed, 12/30/2015 - 21:02
exactly if VG is so much truthful what was teh need for all this SNS campaign. He has been threatening Parth on twitter since beg of dec and this case has been filed only recently. Truth - he is behaving like a scorned lover out to get revenge! Gathering all his chamchas and making ekta maiya tweet for him , leaking the watsapp details - all a thought out plan to show his clout and ruin Parths career.

Can a legal notice sent to a

Permalink Submitted by ramash (not verified) on Fri, 01/01/2016 - 14:38
See carefully... They spelled Parth's name wrong. The spelled it like "Part"...LOL!! http://twitter.com/tellychakkar/status/682183738852306944 Does it mean it's fake??? May be this also fake one http://www.tellychakkar.com/tv/gossip/controversy-over-salacious-whatsapp-group-allegedly-created-parth-samthaan-151227 Request to this site guys, just stay away from this mess. stop back on anyone.they will solve their problems.. just give the result article..certainly fans will happy on you .stop cheap publicity. you will lost your readers

Top Stories
Kya Baat Hai! Check out all the winners of Khatron Ke Khiladi
MUMBAI: Khatron Ke Khiladi is one of the most popular adventure-based reality TV series. The gripping episodes keep the...
Wow! Sriya Lenka becomes the first K-pop star from India
MUMBAI: K-pop is a tremendously popular music genre amongst young adults and teenagers. It stands for Korean pop.Sriya...
Throwback! This picture of Panchayat fame Neena Gupta and Raghubir Yadav will make you nostalgic
MUMBAI: Neena Gupta is currently on a roll. The actress has been making the most of her second innings in the film...
Huge update! Shakti Kapoor to make his digital debut with this series
MUMBAI: Shakti Kapoor is known for his villainous and comic roles in Hindi films. He has featured in around 700 films....
Must read! Shahid Kapoor and Kiara Advani’s Kabir Singh to have a sequel?
MUMBAI: Shahid Kapoor and Kiara Advani-starrer Kabir Singh may turn into a franchise. The Sandeep Reddy Vanga...
Huge update! Ketaki Chitale sent to judicial custody
MUMBAI: Marathi actress Ketaki Chitale was arrested after a case was registered against her for allegedly sharing a '...
Recent Stories

Must read! Shahid Kapoor and Kiara Advani’s Kabir Singh to have a sequel?
Latest Video