MUMBAI: TellyChakkar.com is back with an interesting update from the world of television.

Salman Zaidi has been in the news lately for quitting MTV Splitsvilla X3 because of health issues. Right before the show began, he kind of had a cold war with another Splitsvilla’s confirmed contestant Kevin Almasifar. Kevin has been targeting Salman and posting ‘reality’ about him through his Instagram account. His fans also attacked Salman and kept trolling him.

It has been months of constant trolling that Salman went through. Unable to keep up with the negativity, Salman decided to quit social media and stay away from the same.

He posted a long note as his Instagram stories and informed his fans about the same. He stated that he can very well deal with the online trolls but they’ve started to affect his close ones and that’s indirectly affecting his mental peace. Salman further stated that he has decided that he would be away from social media for an indefinite period of time until the trolls stop or he musters the strength to deal with them. 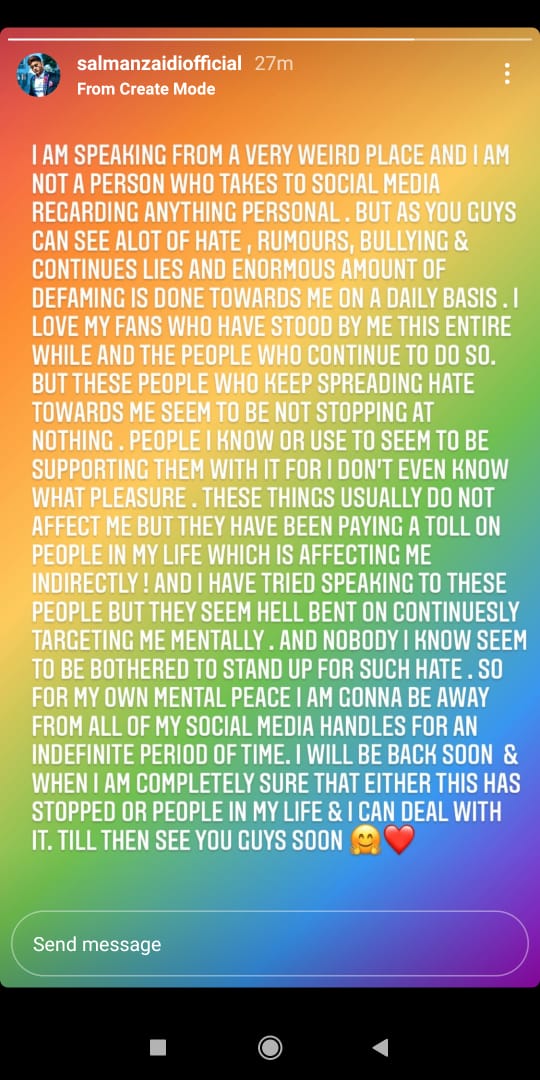 Stay tuned to this space for more updates.

Top Stories
Congratulations! Begusarai fame Manish Naggdev all set to get engaged with THIS person
MUMBAI: Television actor Manish Naggdev popularly known for his roles in Udann, Begusarai, and Banoo Main Teri Dulhann...
Anupamaa: Oh no! Jaswir Kaur aka Devika is in major trouble Here's why
MUMBAI : TellyChakkar is back with yet another update from the telly world. Anupamaa has been one of the most adored...
Interesting! This is how Yesha Rughani aka Gungun takes a breather on the sets of Kabhi Kabhie Ittefaq Sey
MUMBAI: Star Plus’ popular show Kabhi Kabhie Ittefaq Sey is loved immensely by the masses. The storyline brings back...
Omg! Bade Achhe Lagte Hain Ram's Mamaji is in problem, Deet inside
MUMBAI: TellyChakkar is back with yet another update from the telly world. Bade Achhe Lagte Hain 2 has been constantly...
Exclusive! Benafsha Soonawalla to host Carry Minati upcoming gaming show ‘Playground’
MUMBAI: Celebrated YouTuber Carry Minati is  coming  up with the first gaming entertainment show titled  Playground by...
Anupamaa: Lovely! Anupamaa gets a grand welcome at the Kapadia house with Anuj
MUMBAI: Anupama is presently ruling our television screens. The show is doing extremely well and is topping the BARC...
Recent Stories