WHAT! Disha Parmar EXPECTING a BABY with hubby Rahul Vaidya?

A few months ago, there were strong speculations about Disha expecting a baby after she was spotted wearing loose outfits for her various public outings.

MUMBAI: Disha Parmar and Rahul Vaidya are one of the most popular couples of small screens.

Ever since the duo made their relationship, fans can't get enough of this cute couple.

Rahul had proposed Disha on national television which took everyone by surprise.

The pretty diva had also visited the show and accepted Rahul's proposal.

Last year on 16th July, Disha and Rahul took wedding vows in a lavish ceremony amid friends and family.

Their wedding was followed by several functions which also saw many popular faces of television.

Ever since Rahul and Disha got married, fans are waiting for the couple to soon share the good news.

A few months ago, there were strong speculations about Disha expecting a baby after she was spotted wearing loose outfits for her various public outings.

ALSO READ: EXCLUSIVE! BALH 2 fame Aanchal Khurana opens up about getting typecast, says, ''Till now, I get calls only for negative characters''

Disha had also taken to social media to clarify that she is not pregnant.

And now, as the couple is holidaying in London for their 1st wedding anniversary celebrations, they are constantly sharing all the latest updates of their vacay.

Disha has now shared a cute post where she has clicked hubby Rahul as he is caught sleeping.

The actress has put a tag of 'Baby On Board' as she finds Rahul too cute like a baby as he naps. 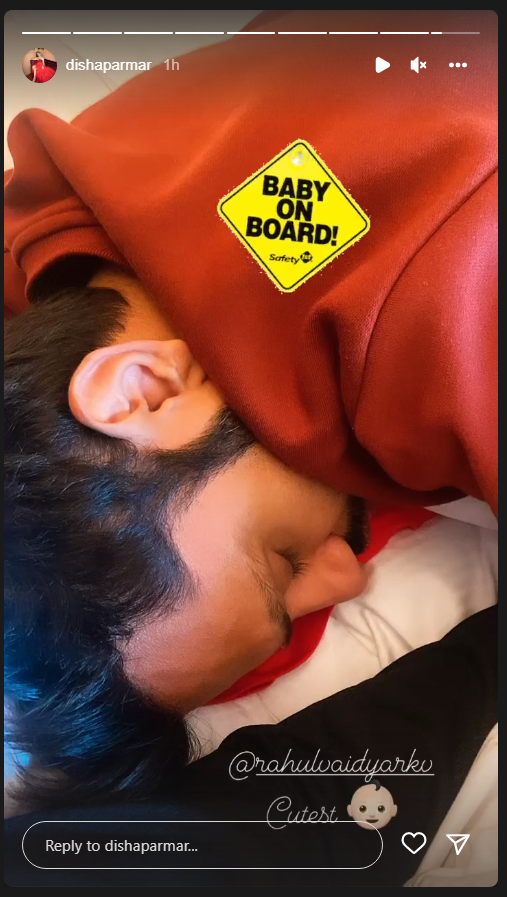 But we know what the truth is.

Isn't Disha's post too cute for words? What are your thoughts on this? Tell us in the comments.

Stay tuned to TellyChakkar for all the latest updates.

ALSO READ: EXCLUSIVE! BALH 2 fame Aanchal Khurana opens up about getting typecast, says, ''Till now, I get calls only for negative characters''

Top Stories
Spoiler Alert! Rabb Se Hai Dua: Raahat in a major dilemma
MUMBAI :Rab Se Hai Dua by Zee Tv, produced by Prateek Sharma is about a Haider and Dua, who play husband and wife. But...
Sidharth Malhotra-Kiara Advani make their first appearance as husband and wife, shooting of Kisi Ka Bhai Kisi Ki Jaan wrapped up and more; here are trending entertainment news of the day
MUMBAI:It is sometimes difficult to keep up with all the updates that are happening in the entertainment industry and...
Dilpreet discovers the truth about Amrita in Sony SAB’s Dil Diyaan Gallaan
MUMBAI : Sony SAB’s Dil Diyaan Gallaan, with its emotional migration story of a family torn apart by misunderstood...
Exclusive! Pushpa Impossible actress Mansi Jain gives a hint about the upcoming storyline
MUMBAI : Sony SAB's new show by Ace TV producer and actor JD Majethia, titled ‘Pushpa Impossible’, has begun to make a...
Have a look at unseen sisters of Bollywood actresses
MUMBAI:Over the time the Bollywood actresses has been grabbing the attention of the fans not only with their acting...
The Kapil Sharma Show: Kapil asks Sharib Hashmi when did he turn Emraan Hashmi as he is paired opposite Nargis Fakhri
MUMBAI : The Kapil Sharma Show is one of the most loved comedy chat shows on television.The trio of Krushna Abhishek,...
Recent Stories

The cast of Bade Achhe Lagte Hain 2 to reunite with Nakuul Mehta, Disha Parmar and previous co-stars for a party